Half of Native American homicides not reported to FBI

Law enforcement agencies failed to notify the FBI about nearly half of homicides of American Indians and Alaskan Natives committed from 1999 to 2017, according to a study by the nonprofit Murder Accountability Project (MAP).

The study found Indian murders are the least likely of any racial group to be reported to the federal Supplementary Homicide Report (SHR) which is part of the FBI’s Uniform Crime Report, the nation’s official accounting for major crimes. These records are valuable to local, state and federal authorities for identifying and responding to challenges facing law enforcement. 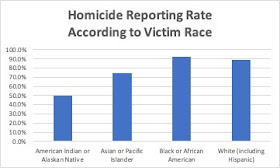 The study found reporting of Indian murders has improved in recent years, especially since 2015 when several tribes like the Navajo Tribal Police began reporting homicides to the FBI for the first time. Reporting rates also vary by state, with the largest number of unreported homicides occurring in Arizona, New Mexico and Oklahoma. To download the eight-page MAP report on these reporting failures, click here.